Open since the beginning of November, La Pizza on Friargate, Derby has already proven quite popular so I wanted to see what the fuss was about! 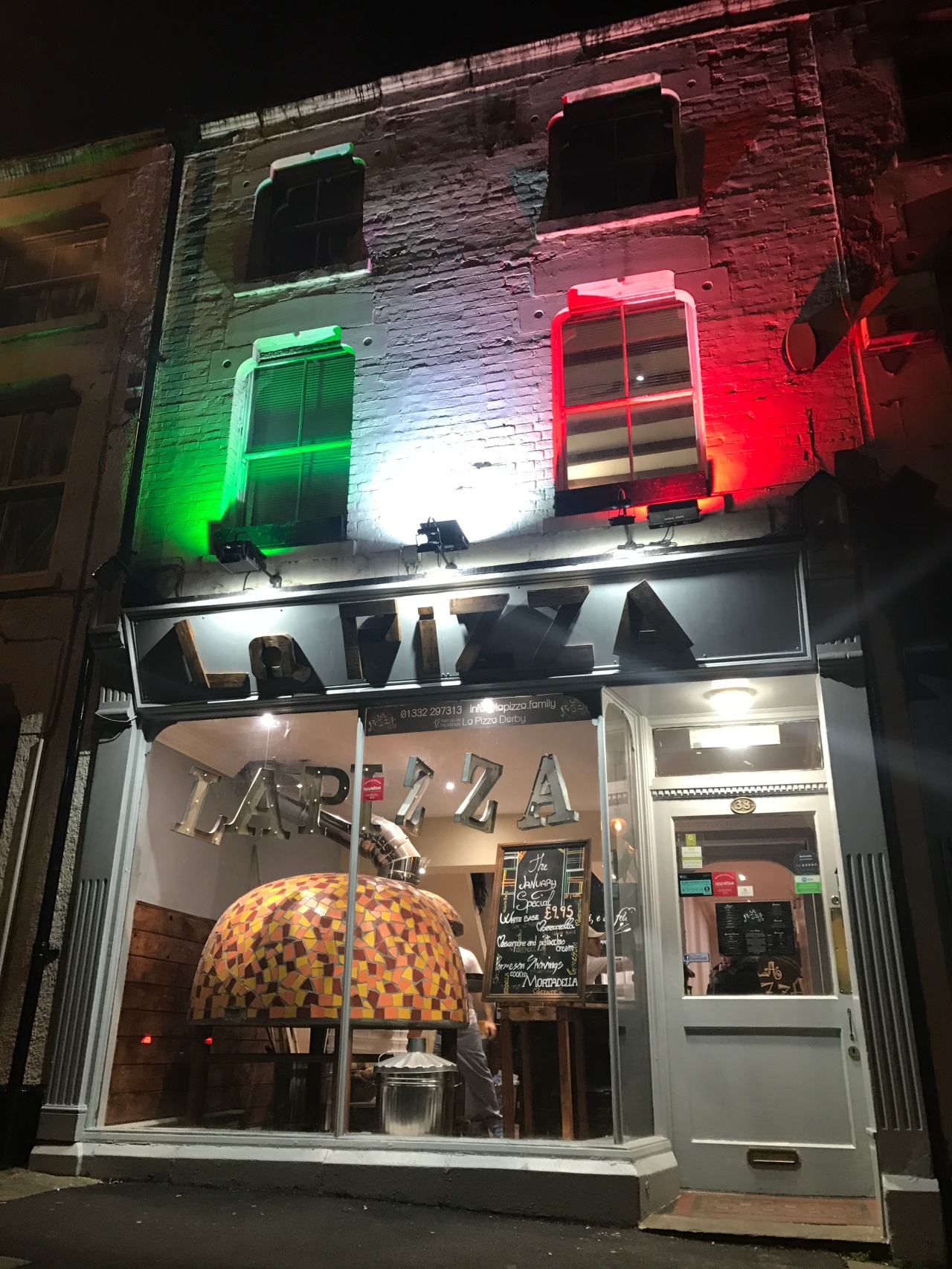 All the pizzas here are Neopolitan style made with a sourdough base and are cooked in the wood burning oven you can see above, which was made in Italy and shipped to the UK, and takes pride of place in the front window

We visited at about 7:30pm a couple of Wednesdays ago without a reservation and were seated without a problem – the restaurant was about half full when we arrived but continued to get busier as we ate so there was a good atmosphere. The owners have managed to make a large high ceilinged room feel warm and inviting using dark colours and some bespoke graffiti artwork

We chose a couple of starters to share, a simple mixed salad that had plenty of olives and tomatoes, and then some dough balls. The warm dough balls were tasty enough on their own but the accompanying sauce was awesome! It almost tasted like a smooth bolognese with loads of parmesan and was so moreish that we kept it on the table for dipping our pizza crusts in!

For the main event I couldn’t resist the special ‘Stella’, a star shaped pizza with a different filling in each point including sausage, ham, mushrooms, olives & pepperoni. The delicious bouncy sourdough crust is folded over into pockets which hold each of the tasty fillings, almost like mini calzones. It was topped with loads of shaved parmesan & rocket leaves which was a nice extra touch. I enjoyed delving into each point to see what was inside (my favourite was the sausage) and the generous layer of golden baked mozzarella brought it all together. A gorgeous pizza and nice to have something a bit different 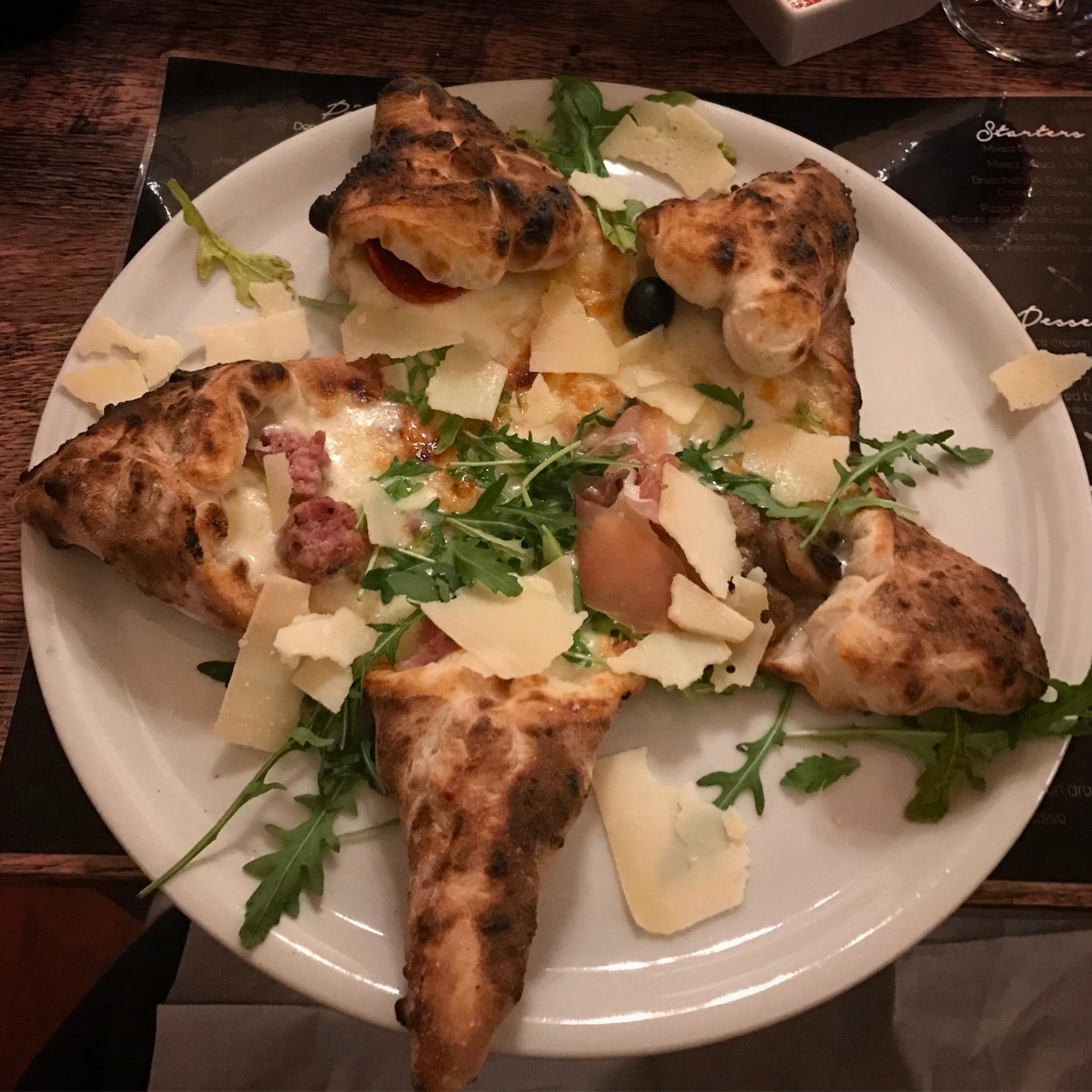 The husband went for the Garibaldi Meat Feast which included salami, parma ham, sausage and cooked ham, again with a lovely light and puffy sourdough crust and as with my pizza, a generous amount of toppings. He declared it the best pizza he’s ever had (and believe me he’s had a lot!)

Our inner children just had to try the nutella pizza, and our request for half plain nutella & half with everything was immediately accomodated. The same sourdough base (yes it does work!) was topped this time with nutella, smarties, marshmallows, sprinkles and whipped cream and was so fun and completely indulgent! I definitely couldn’t eat a whole one to myself but wouldn’t hesitate to share one again!

Throughout our meal service was speedy (pizzas are cooked in 60-90 seconds!) but not rushed, and staff were always on hand if you needed anything. We couldn’t fault the food and surprisingly didn’t feel uncomfortably full after all that dough – the Neapolitan style sourdough stops them from feeling to heavy and stodgy and the size of each pizza is spot on

La Pizza is a great place for a casual meal and fantastic pizza any time of day, and they also deliver to some areas of the city at certain times so it’s worth enquiring if they deliver to you (if you’re city centre based they’re on Deliveroo too!) It won’t be long before we’re back that’s for sure!