The Cross at Kenilworth

Last Sunday we we visited pub restaurant The Cross at Kenilworth.

Sister restaurant to the long standing Michelin starred Simpsons Restaurant in Edgbaston, The Cross is a 19th century inn that that has been carefully refurbished to reveal it’s original features and was re-opened in late 2013

Holding its own Michelin star since 2014, The Cross is owned by Andreas Antona who has worked with some of the biggest names in the chef world. In 1993, Andreas opened his first restaurant and two years later was among the first restaurants in the area to win a Michelin star.

Head chef at The Cross is Adam Bennett, who has cooked at several high profile restaurants – most recent being Simpsons. In January 2013, Adam and his commis chef, Kristian Curtis achieved the best result ever for a UK team in the Bocuse d’Or – the world’s most challenging and prestigious cooking competition. Our meal was definitely going to be in good hands!

We had made a reservation for 2:00pm, and arrived slightly ahead of time to enjoy a drink before we ate. The pub feels inviting when you enter, with exposed beams and low ceilings, which then open up into the bar and dining areas. We chose two comfy seats by the bar and ordered our drinks – I had a glass of the Ruinart “R” Brut and the husband went for the Kirin Ichiban malt beer which he’d had before but said was a really good pint.

We had gone with every intention of having the fantastically priced 3 course lunch for £30, however we just couldn’t resist the specials and the a la carte menu….

A basket of sourdough bread was brought to the table with an unusual but very tasty butter that had a bit of a cheese-like flavour. Upon enquiring, I was informed that it was cultured butter made using Himalayan salt which explains the slight tang. 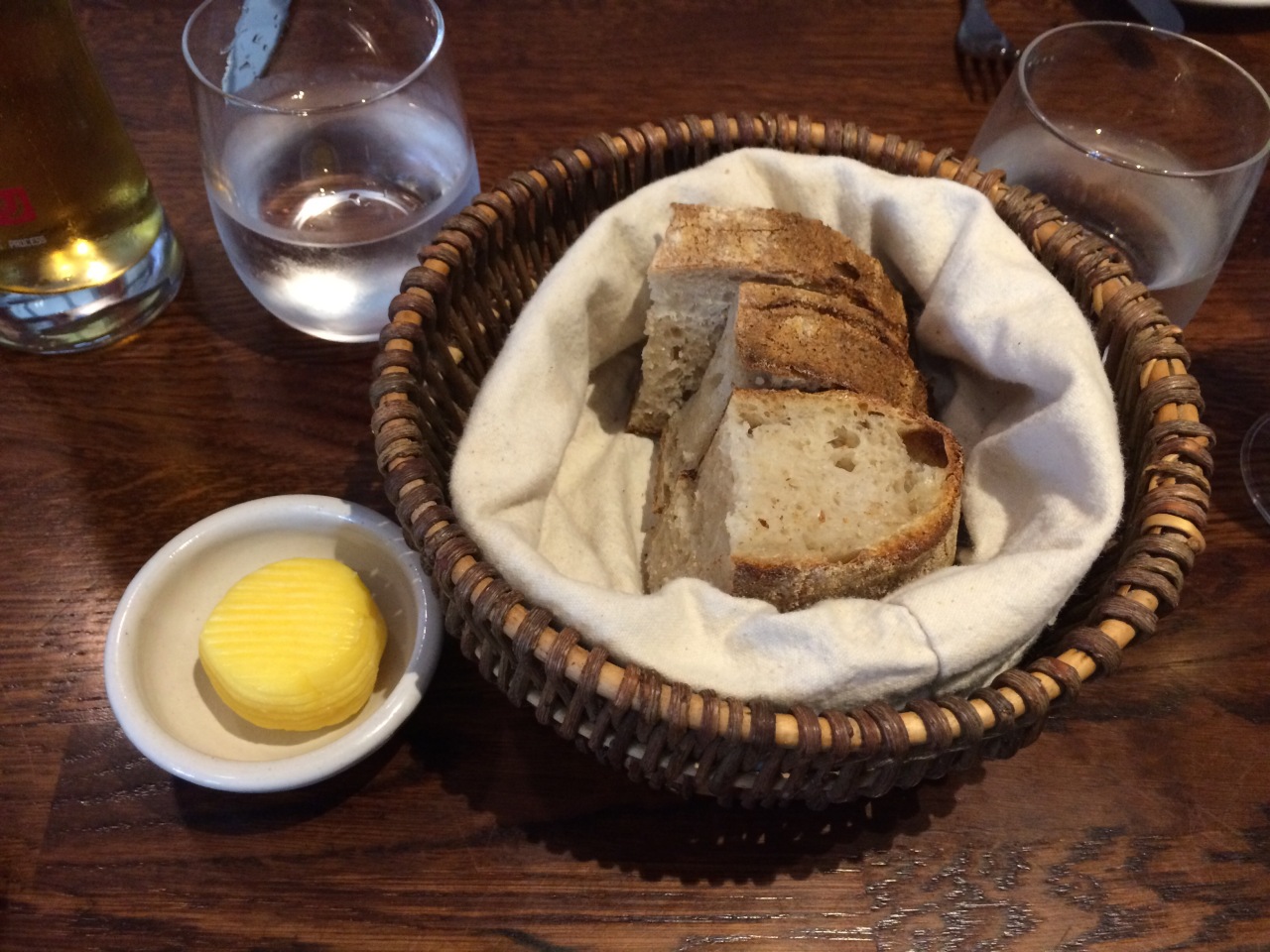 For starters I chose the BBQ sweetcorn soup with chorizo, squid & roast peppers. This was presented as a foam-topped bowl containing pieces of charred corn, along with the finely diced chorizo, squid and peppers, and then the wonderfully creamy sweetcorn soup was poured around. It doesn’t look much in the photo below but as a bit of a sweetcorn obsessive (love the stuff) this dish was heaven for me! It had a good background spice to it and all components were nicely cooked, although I would have liked a little more chorizo and corn pieces 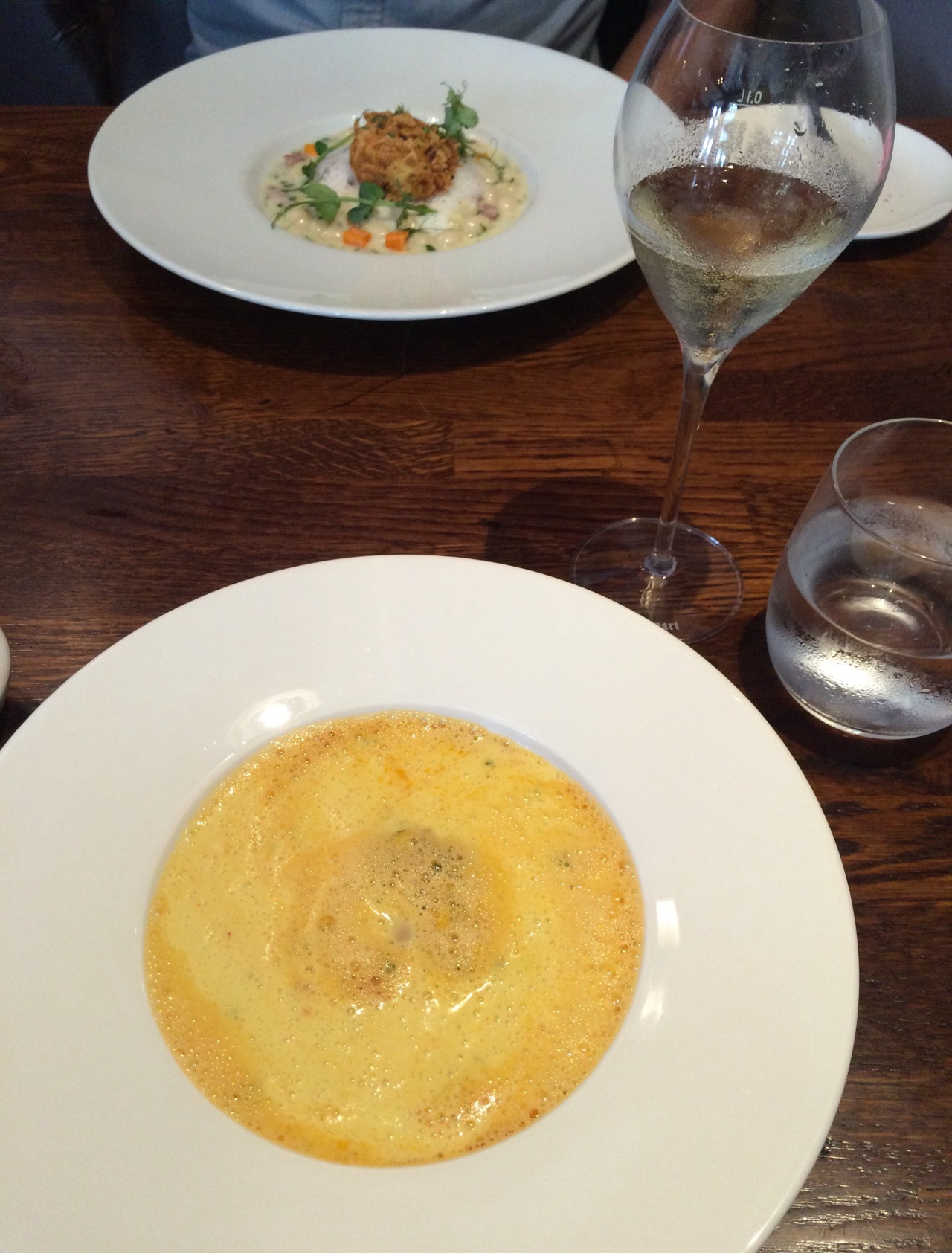 The husband chose the crispy duck egg, ham hock, white beans & parsley. A perfectly cooked egg with an oozy orange yolk was encased in a crispy coating made using thinly sliced bread, giving a nice contrast of textures. The creamy bean ‘stew’ with ham was well seasoned and had a good helping of parsley, which although is my least favourite herb I quite liked (I had to use the last of my sourdough to mop up some of the sauce to try for myself!)

As you can see, the building really has been beautifully renovated and the dining room we were sat in had been made to feel grand yet cosy at the same time with the use of warm muted colours, dark wood panelling and strategically placed lighting

For mains I opted for the beef cheek with carrots, pickled walnuts, mash and beer & bone marrow sauce. With this I chose a glass of the Porteno Bodega Norton 2015 Malbec from Mendoza, Argentina which turned out to be the perfect decision! The beef cheek was that great mix of browned on the outside and deep pink and falling-apart on the inside which only comes from slow cooking. Possibly the smoothest mash I’ve ever had was topped with the rich meaty sauce, and accompanied by baby carrots, crispy kale & sweet carrot puree. I couldn’t really taste the pickled walnuts in the dish though. I was pleased by my choice and it was deceptively filling!

As a bit of a roast dinner fiend, the husband didn’t even blink before declaring he just had to have the roast Chateaubriand with yorkshire pudding, roast potatoes, & vegetables. This came with a bowl of cauliflower cheese & a jug full of the delicious roasting juices (which our waiter advised would make the dish even better – he wasn’t wrong!). I was reluctantly allowed to try some of the Chateaubriand and can honestly say it was probably the nicest beef I have ever tasted! Just look at how pink it was… Lovely fresh veg, crispy potatoes with a fluffy inner & creamy cauliflower cheese were the perfect partners. He did comment that the potatoes were hard to cut but easy to eat, which to me means the perfect amount of crunch! His main was accompanied by a glass of Conde de Valdemar Crianza 2011 Rioja from Spain which was nice, but we both agreed it wasn’t as smooth and balanced as the Malbec

With a craving for something sweet we just had to have dessert. The husband ordered the praline & chocolate chip souffle which we were advised had a 20 minute wait (this was a perfect little break to be honest) and it arrived just ahead of this time. The light as air souffle was gorgeously nutty with molten pockets of chocolate. He also ordered the dessert wine pairing of Moscato d’Asti G.D. Vajra, Piemonte, Italy which was lovely. 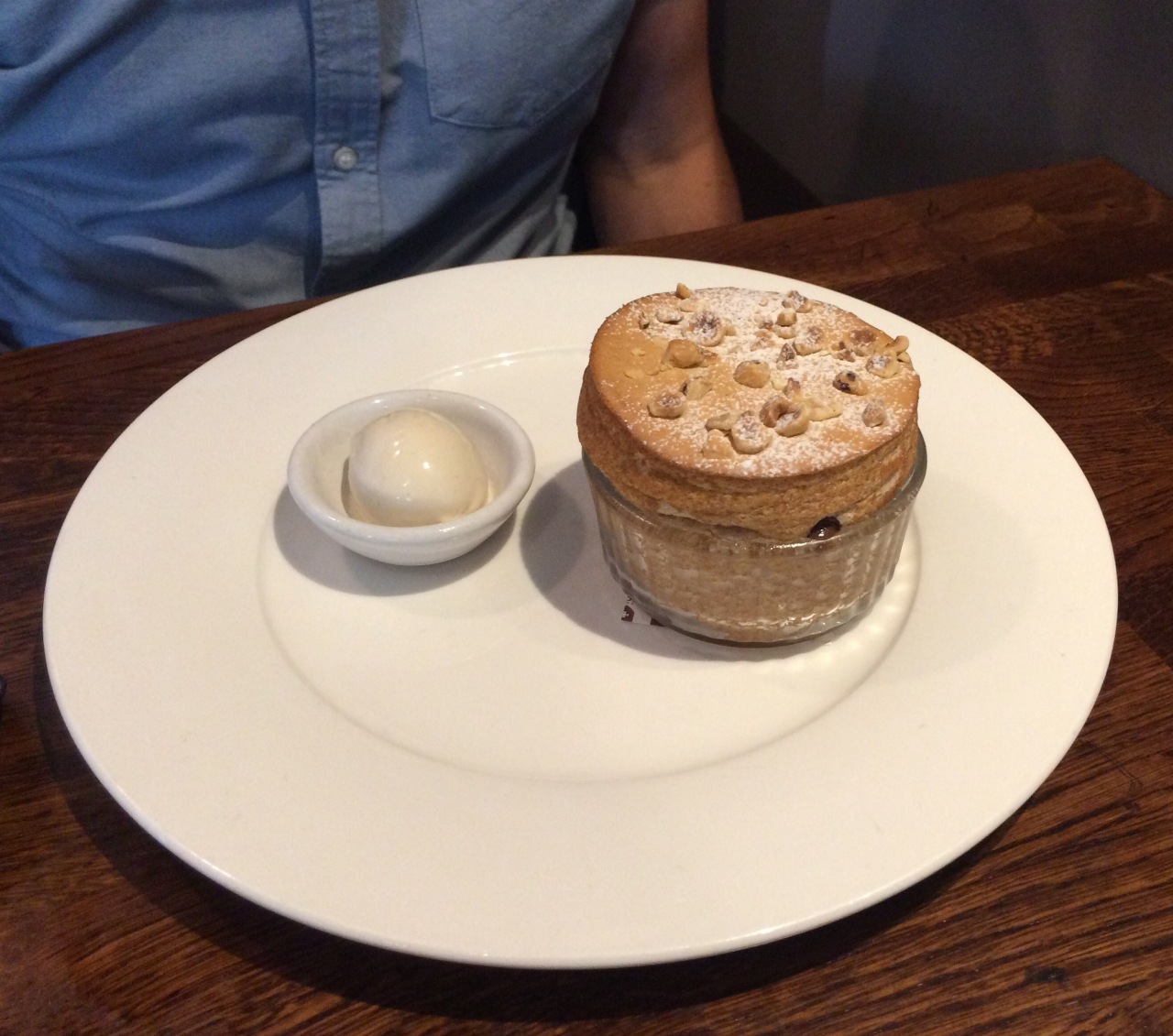 After spying someone on the table next to us having the chocolate sphere I couldn’t resist choosing it myself! The sphere was painted with edible gold paint…

To reveal raspberries, coconut sorbet and biscuit crumb inside! The combination of warm melted chocolate, sharp berry sauce and coconut sorbet was amazing, and I was once again very pleased with my decision.We did have to giggle when the man next to us smashed his sphere with a spoon, to then coyly re-assemble it when the waiter appeared with a jug of sauce to pour over and melt it! I also ordered the dessert wine pairing of Maury Rouge Domaine Mas Amiel Organic VDN, from South West France which I preferred on it’s own as it didn’t taste as sweet as I like after having all that chocolate

Feeling just right, we decided against coffee so as not to tip ourselves over to uncomfortable territory.

From the moment we arrived to when we left we felt really welcome and relaxed. The staff were really engaging without being intrusive and made the whole afternoon enjoyable for us. They were also more than knowledgable when asked questions about the dishes.

We both commented that we’d love to come back, especially on a sunnier day to take full advantage of the garden and outdoor seating – if only we lived just down the road! We’re also planning to visit Simpsons at some point, after having such a great experience at The Cross

You can visit their website here, and I would recommend booking.