Throughout the year Masa has a calender of ‘Taste of Masa’ events. Held once a month, previous events have included School Dinners, Wartime Rations & Roald Dahl’s Revolting Recipes.

We made a reservation for their August event on 25th – ‘Taste of Derbyshire’. The menu for the evening was only decided a few days beforehand, as Head Chef Matt Gabbitas was busy sourcing fresh, in-season ingredients from local suppliers – and picking them himself too!

I haven’t been to Masa for years, but the recent rave reviews, their ‘Restaurant of the Year’ award win at the Derby Food & Drink Awards 2015 (they have also been nominated again this year) and the Head Chef’s Instagram all had me intrugued to go back…

The restaurant is housed in a converted Wesleyan chapel – how beautiful does it look in this light?

We arrived just ahead of our 7:30pm reservation for drinks in the downstairs lounge area. After a quick chat with our host we decided to go for the wine pairings to compliment our meal.

A short time later, we were taken up to our table which was waiting ready for us, complete with iced water and a letter from the chef explaining a bit about the local produce used for the evening’s meal

Cajun bread with black olive butter was brought out first – freshly baked & still hot, the butter melted and quickly sank into the soft loaves (meaning it’s the law to add more butter, right?) The flavour of both the bread and butter was subtle so it wasn’t overpowering, and made a nice change from plain bread 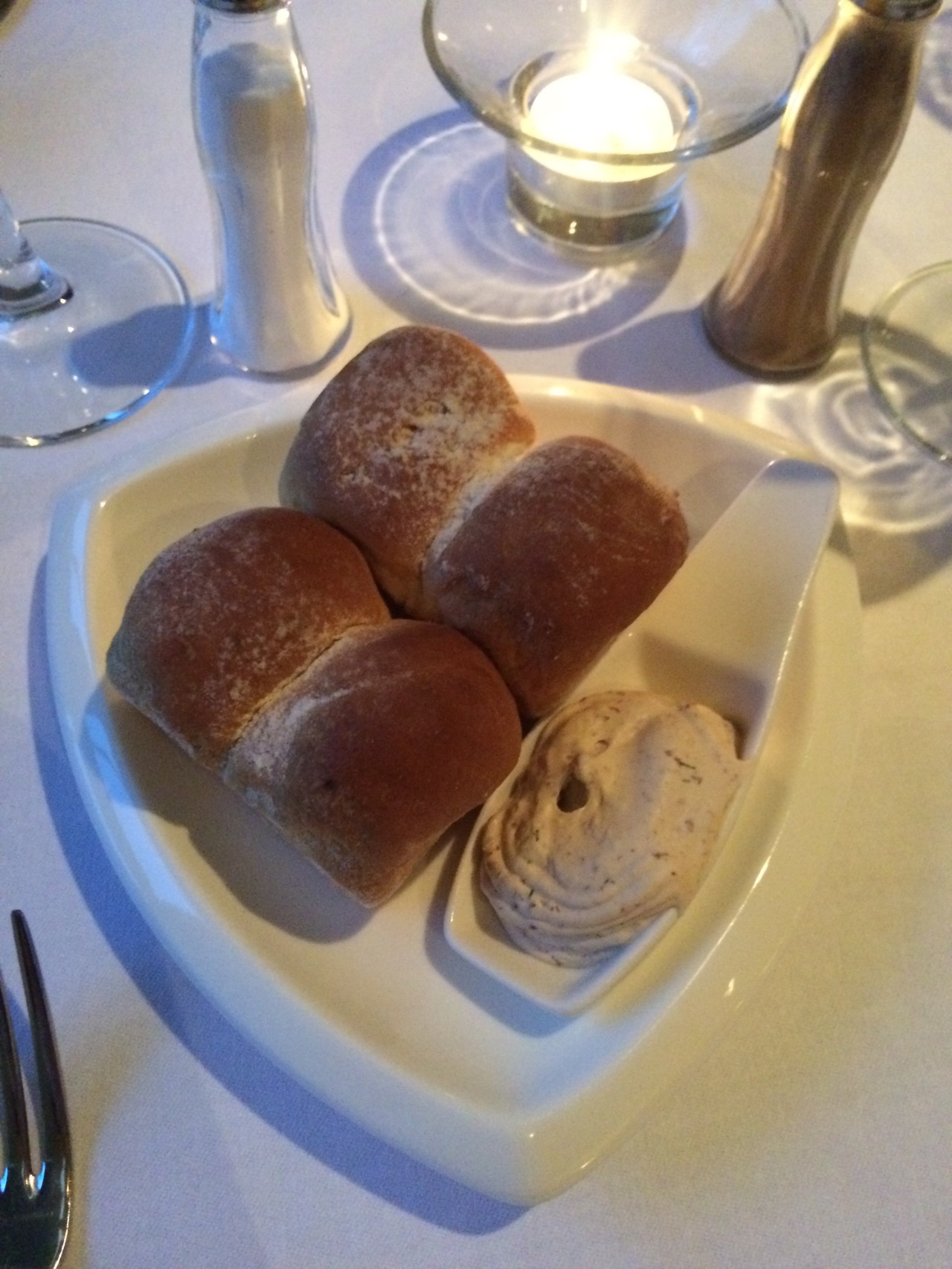 Our first course was a tomato consommé – I was really impressed with not just how clear the consommé was, but also how much flavour was packed into it, giving an intense tomato & basil taste which was delicious. I bumped into the chef after our meal and he told me that it was strained through a muslin cloth for two days to achieve the clarity. The fresh mixed tomatoes added some colour and crunch. Wine wise, the first two courses were paired with a glass of Macon Villages

Up next was a salad of beetroot, radish & ricotta. A very colourful dish, the different varieties and preparations of earthy beetroot & crunchy peppery radish sat well with the creamy whipped ricotta

The third course was Chatsworth Estate smoked trout with potato, smoked bacon, borage & mayonnaise. I must say I was pleasantly surprised by just how much I was wowed by the trout – it had a beautiful strong smoky flavour and with Chatsworth only being an hour away, I’d definitely pop to their farm shop to buy some. The bacon added a saltiness and the mayonnaise was nice & smooth. The second wine we received was an Australian Shiraz

The meat course was lamb cannon with seasonal veg. The lamb was beautifully cooked with a gorgeous rich jus and charred runner beans – I could have eaten it all over again!

The accompanying seasonal veg consisted of roasted tomatoes, mixed courgette and squash, and was the perfect amount for two to share 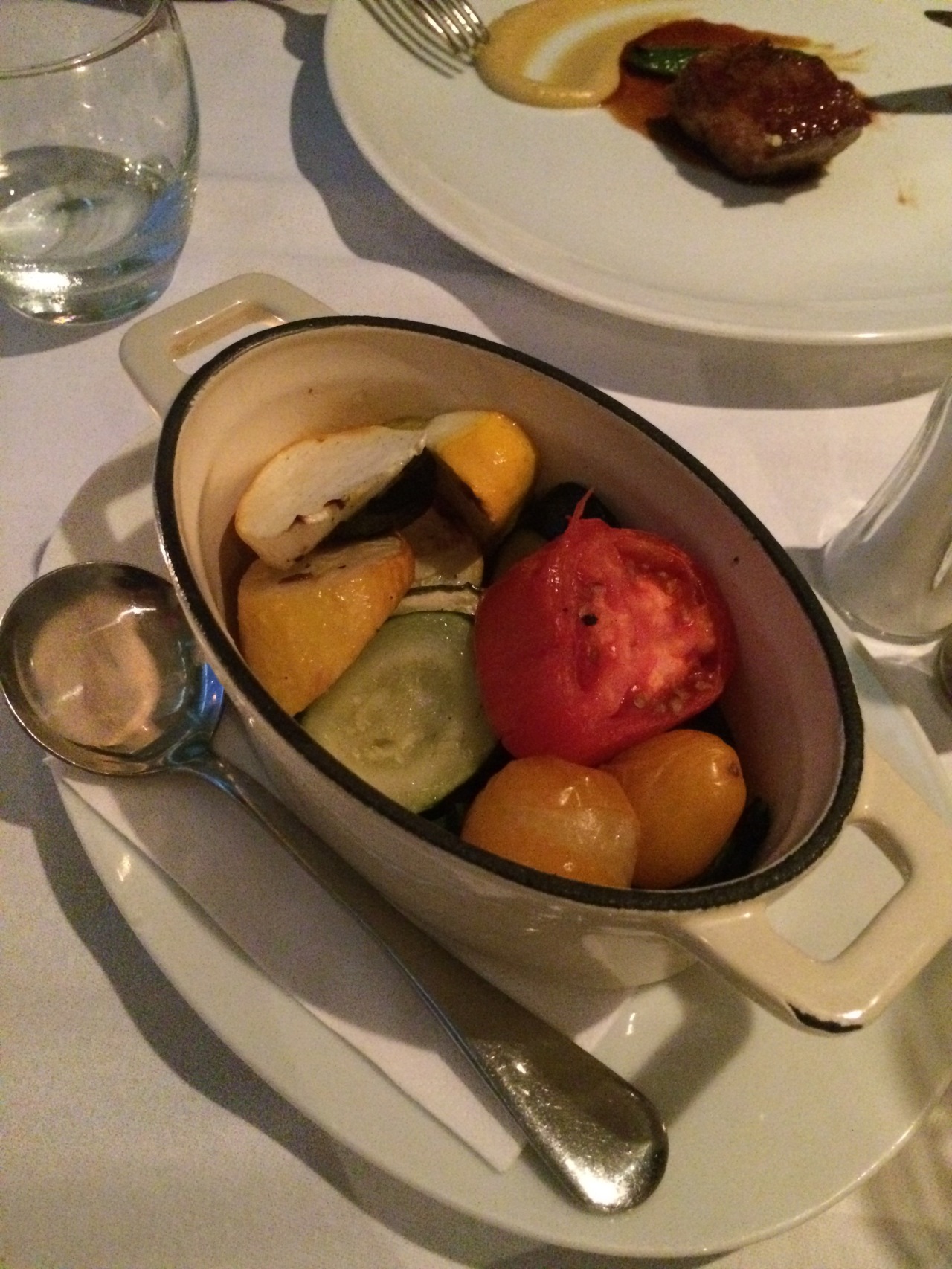 The first dessert course was honey tart, ‘Duffield dollop’ and raspberries. The texture was reminiscent of Bakewell tart – sweet, soft, sticky and wonderfully moreish! The garnishes of local clotted cream and fresh berries worked perfectly. We both agreed that we weren’t massive fans of the dessert wine pairing, which was slightly more tangy than we would usually choose. 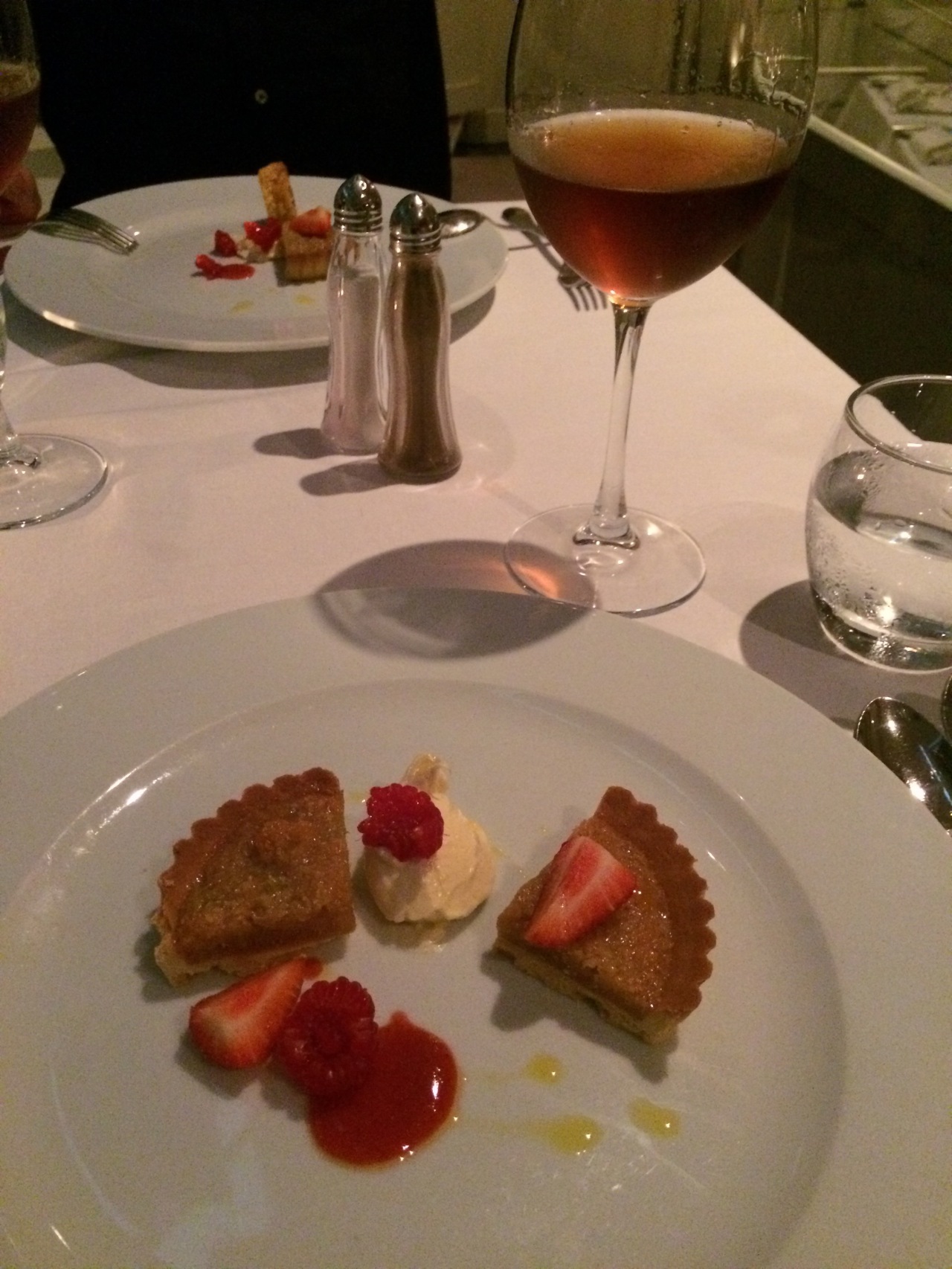 The second dessert was duck egg custard, blackberry & shortbread. I thought I might have found this dish a little too much after everything we had previously eaten, but the custard was so light and was balanced out well by the blackberry compote underneath, and the buttery crumbled shortbread biscuit on top.

To finish was Sage Derby cheese with Derbyshire ale chutney & oatcakes. I would usually choose a soft cheese, however the sage Derby was lovely and that ale chutney was amazing!

After our meal we headed back downstairs for coffee, which came with beautiful white chocolate petit fours with whole raspberries inside 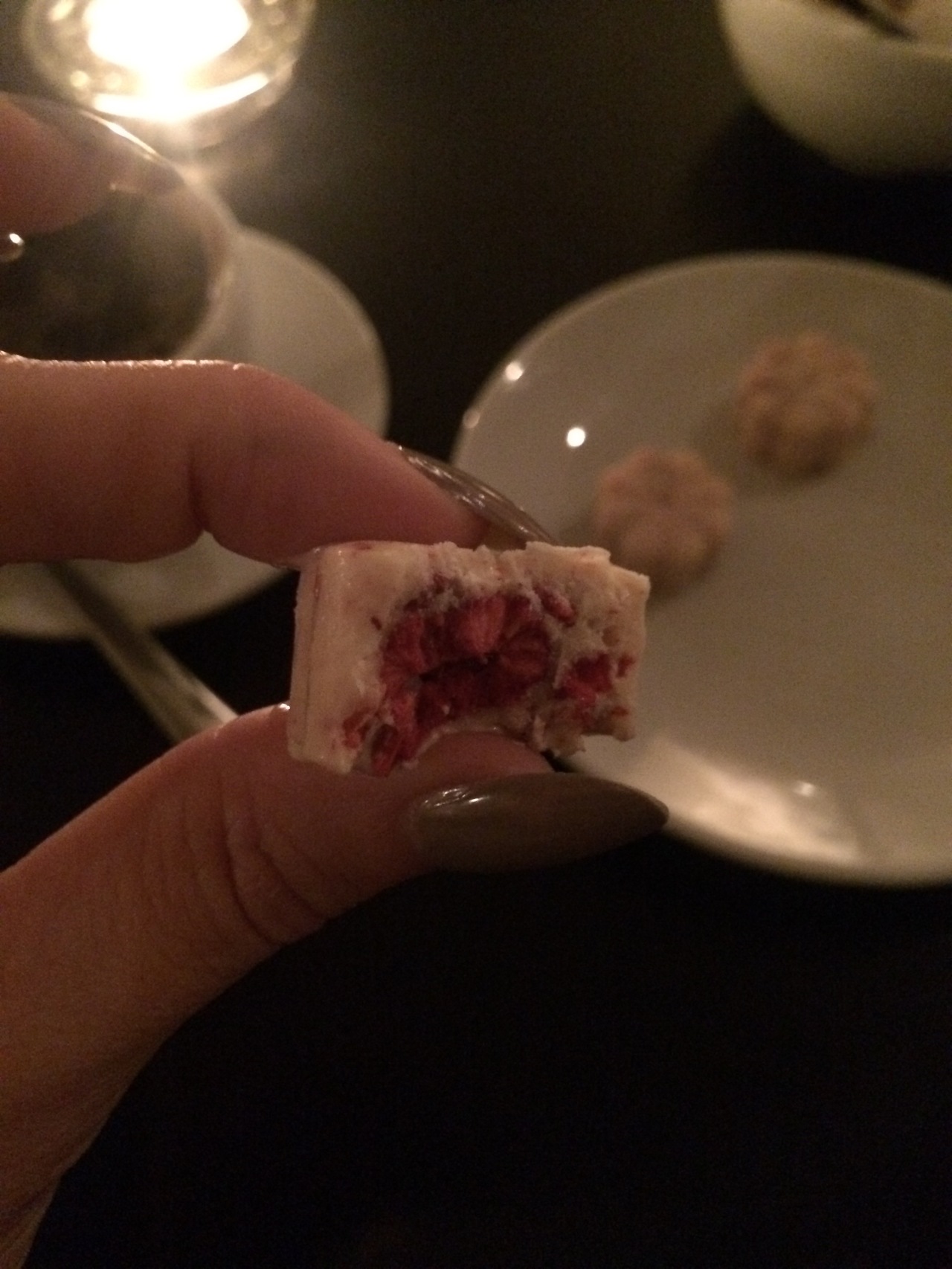 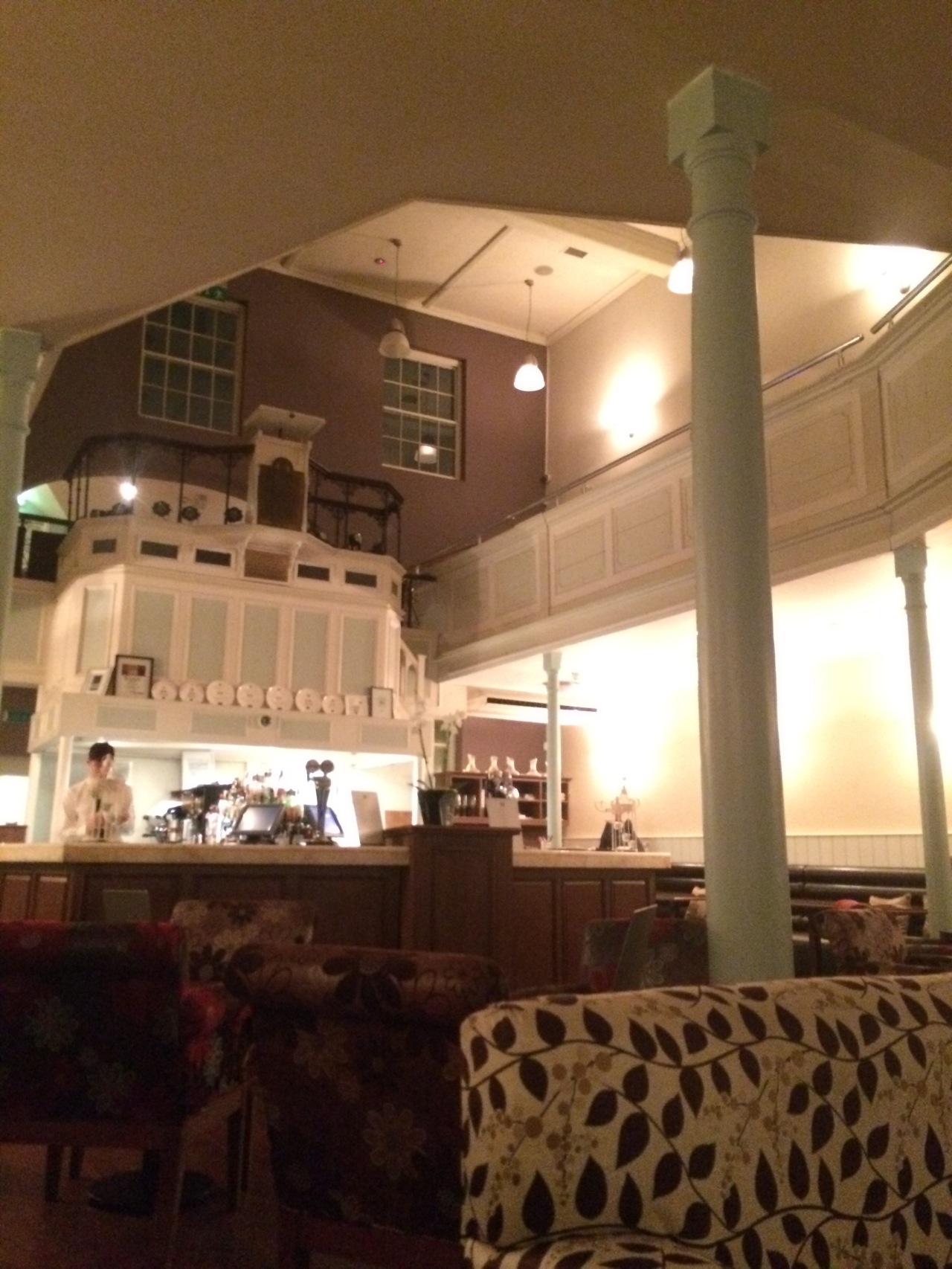 The 7 course course tasting menu was ridiculously good value at £32, and being able to have this menu with wine pairings for £45 is just fantastic! I would have preferred 6 smaller glasses of wine matched to each dish rather than three large glasses, but that is only a minor point.

The staff were welcoming and helpful, and gave very efficient service which is no mean feat giving the obstacle-course-like chapel that they have to negotiate whilst carrying hot food and full drinks! One thing I would have enjoyed was more explanation offered from the waiter/waitress of each dish as I love to hear about what they are comprised of

You can see that the chef is really trying to elevate the standard of cooking in Derby and I would say he’s definitely achieving it.

It was also really great that with the help of the Derby Food Assembly (read more about them here) the chef was able to contact, and develop relationships with, local suppliers – all of which provided superb ingedients for the menu we received.

I wouldn’t hestiate to recommend a visit to Masa, and we’ll definitely be back to try their main menu and Sunday lunch.

They have also released their menus for the festive season (I can’t quite bring myself to use the ‘C’ word just yet!)